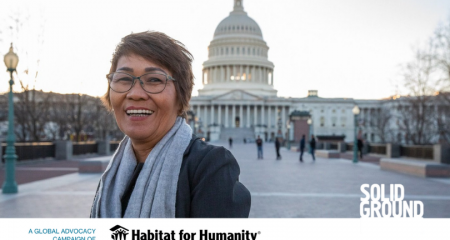 Finding safe, decent and affordable housing and access to land in Cambodia can be difficult. According to reports from 2015, the United Nations say that 55% of Cambodia’s urban population live in an informal settlement or slum. Prior to Solid Ground, Habitat Cambodia had engaged in advocacy through a social land concession pilot project in the Battambang Province, increasing security of tenure for an informal community.

Through Solid Ground, Habitat Cambodia formed a formal partnership with the government of Cambodia to implement the National Housing Policy, a policy launched in 2014 mandating the improvement of housing conditions for low-income populations and meeting the housing deficit in Cambodia.

To address these gaps, Habitat Cambodia partnered with Habitat Wake County. Wake County, home of nearly a dozen universities and colleges, is considered a research hub in the U.S. Led by the organization’s advocacy committee chair, Susan Corts Hill, Habitat Wake County connected research-minded university groups and international volunteers with Habitat Cambodia to gather best practices on housing and land issues. Research topics included: affordable housing, housing and gender policy, and housing and disability policy. Habitat Cambodia will now use the resulting research to inform the Cambodian government’s implementation of the National Housing Policy in a way that advances access to decent housing.

This partnership was brought full-circle at Habitat on the Hill 2019 when hundreds of staff from local Habitat for Humanity organizations were able to learn about Habitat Cambodia’s advocacy work from Bernadette. While conference participants from across the U.S. met with their elected representatives, Bernadette and staff members from Habitat Wake County and Habitat for Humanity Charlotte took their shared message of the need for secure tenure and decent, affordable housing to the Cambodian embassy in D.C. People from around the world, from Cambodia to the U.S., face barriers to accessing affordable and decent housing. And Habitat for Humanity intends to be intentional about working together in solidarity and peer sharing across regions.

Note: This article is published on the Solid Ground website.

From Crown to Hard Hat