Habitat for Humanity International in Cambodia (HFH C) began in 2002 and registered with the Royal Government of Cambodia on 16th in January 2003. Through partnership with local NGOs and local authorities HFHC has implemented its housing program in Phnom Penh since April 2003, and has expanded its housing support projects to Siem Reap and Battambang the coming years.

While poverty has decreased significantly, many Cambodian families are hovering only just above the poverty line. Nearly three quarters of Cambodia’s population still live on less than US$3 a day in 2011a, according to the World Bank. Poverty is largely concentrated in the rural areas though urban poverty may be rising. HFH Cambodia seeks to break the cycle of poverty through durable, affordable housing solutions. Since 2003, HFH Cambodia has enabled more than 18,000 families to build strength, stability and self-reliance through innovative housing and human settlements interventions.

During the tyranny of the Khmer Rouge’s rule in Cambodia (1975-1979), all land registered and cadastral data were destroyed. Many Cambodians, having lost their official land titles found themselves suddenly to be “squatters.” This dynamic was strengthened by massive rural urban migration at the end of the civil war in the early 1990s when hundreds of thousands returned to urban areas in search of livelihood opportunities. Without clear land classification and maps, they built houses on any available land, including public state land. As a result, there is currently in Battambang alone an estimated 10,500 people living in 90 different informal settlements/slums. These families are under constant threat of forced eviction and often live in precarious conditions as the absence of titles deters the government from authorizing any upgrades to the settlements (e.g. water, drainage, road, waste management) and/or housing conditions.

Habitat for Humanity Cambodia engaged with the government to try and support actual implementation of the existing legal framework for the regularization of informal settlements. After a successful implementation phase between 2008 and 2013, the Battambang government granted HFH Cambodia 82 plots of land following a Memorandum of Understanding (MoU) with the Battambang Municipality Governor to develop a housing project for 82 families currently living within informal settlements in Battambang City. The project was named ‘Strengthening Civil Society-Government Engagement for Land Tenure Cambodia Big Build – November 2017 Security’. Building on the five-year pilot experience on urban Social Land Concession (SLC), HFH Cambodia launched another three-year project co-funded by Clifford Chance, Habitat for Humanity Australia and Habitat for Humanity Canada (through its Global Neighbors Program).

The partnership delivers interventions on capacity building for land rights and land tenure, the provision of housing finance and housing support services, and strengthening of partnerships in urban SLC in Battambang Province through the project named SECURE – Safe and Empowered Communities for Urban Reintegration.

The housing support services component targets 100 families informally living in and outside of the target area who are in need of access to a housing loan or home improvement(s). This is delivered through a mixed subsidy approach in order to provide tailored housing support service to varying economic status and financial capacity of family. In this intervention HFH Cambodia has a partnership with KREDIT, a Microfinance Institution (MFI). Of the 100 families, Clifford Chance is supporting 30 families, while HFH Canada is supporting 40 families, and HFH Australia has supported 30 families.

For this year’s special build, approximately 200 volunteers with join HFH Cambodia in Battambang Province to build at least 15 safe, quality and affordable houses for families for a week. Battambang is located in the northwestern part of Cambodia, 291km from Phnom Penh. Its border is Banteay Meanchey to the north, The Tonle Sap Lake to the East, Pursat to the South and Pailin and Thailand to the West. This city has 14 Districts, 102 communes and 799 villages and with 234,950 Households and 1,121,190 population (565,466 women = 50%). 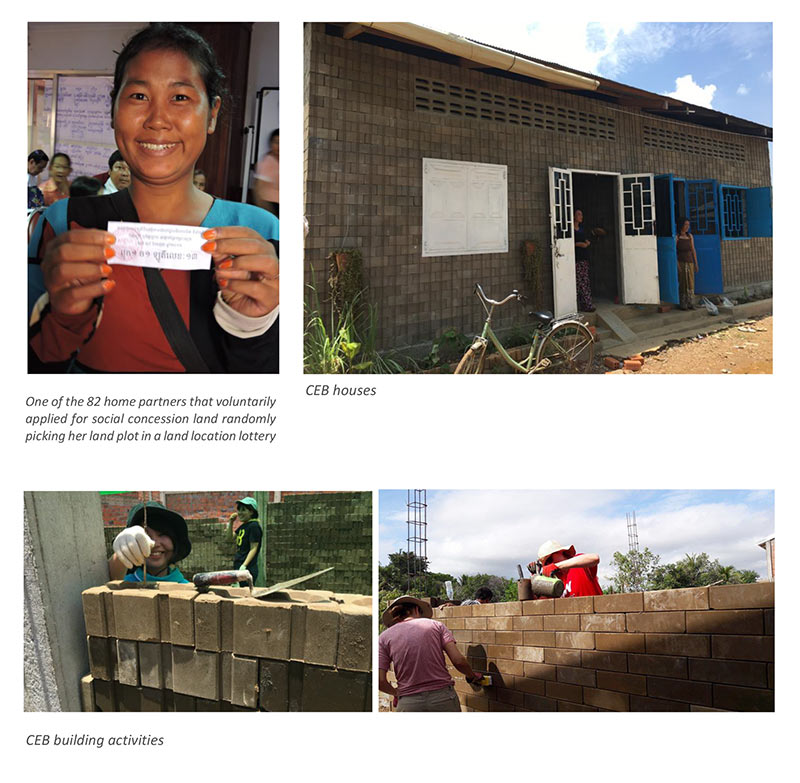