The 7th annual Habitat for Humanity Young Leaders Build (HYLB) 2019 campaign in Cambodia is launched on International Volunteer Day, 5 December 2018, and will culminate on 26 May 2019 in Kandal, Battambang and Siem Reap when thousands of young people in these provinces take the lead in building homes and communities including house construction, school cleaning, hygiene and sanitation education, fundraising events, and advocating for decent housing on social media.

Yaro Vy, a popular actor, TV presenter, and MC among young people in Cambodia will join Habitat Cambodia to be a youth ambassador for this year’s campaign. “I’m happy and proud to be part of #Habitat to work for the benefit of mankind. Thanks for taking me as a part of this amazing youth movement!” – Yaro shared Habitat Cambodia post with his caption on his Facebook page. 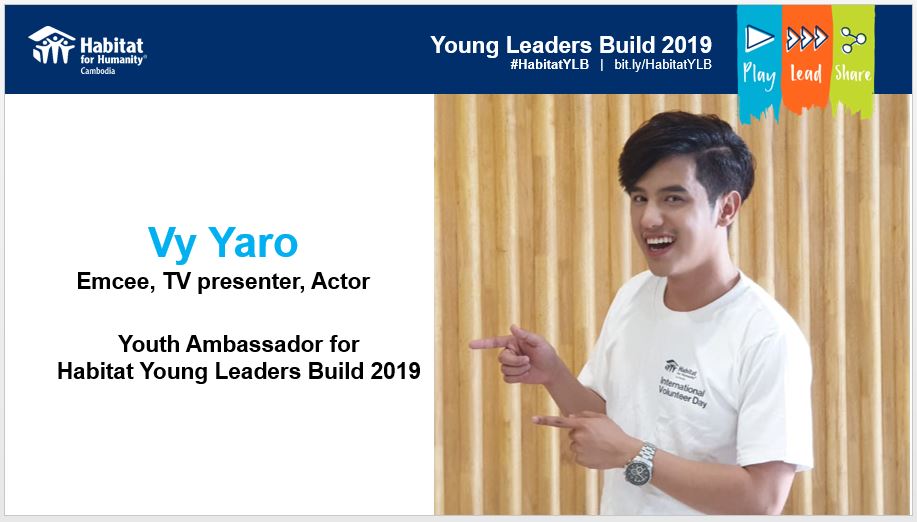 Under this campaign is also the Habitat Young Leaders Build – Leadership academy, a workshop that will equip young people with self-leadership skills and enable them to better lead others. Developed in partnership with the Center for Creative Leadership, the 10-module training includes two modules on sustainable communities as an introduction to the United Nations’ Sustainable Development Goals. Participants will also learn about the need for decent housing, and identify specific community actions and projects that support their community. During its 6-month run, Habitat Cambodia has trained 2,985 young people.

Habitat for Humanity Young Leaders Build 2019 (HYLB) is an Asia-Pacific regional initiative that engages young people to volunteer, fundraise and lend their voices to the need for decent housing as a way out of poverty and toward building strength, stability, and self-reliance. It is an annual campaign driven by motivated and socially responsible youth who take action and rally together in a region where one in eight people live in slums, according to the United Nations.

Since 2012, over 12.5 million Habitat Young Leaders Build supporters have raised US$7.5 million in funds to help build houses and supported more than 29,000 families to achieve the strength, stability, and self-reliance they need to build better lives for themselves.

From Crown to Hard Hat