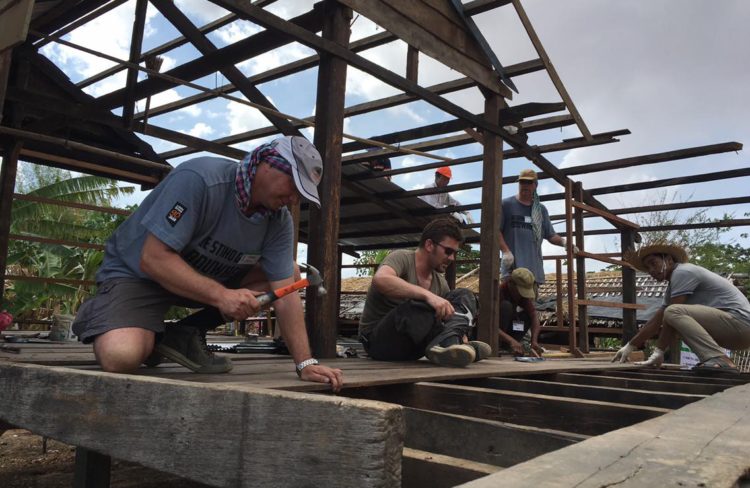 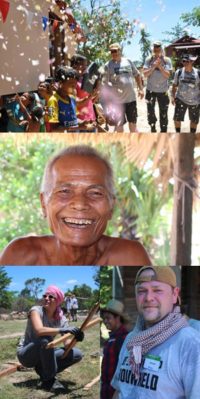 Cambodian families had a first-hand experience of the Dutch work ethic during a four-week relay build with volunteers from the Netherlands. Despite rain and the blistering heat, the volunteers from De Stiho Groep, a Dutch DIY and building company, pressed on to work on 20 houses and 24 toilets.

A total of 206 staff members and customers of Stiho built strength, stability and self-reliance and shelter with 44 low-income families in Sra village, Siem Reap province. The volunteers also took part in events to promote water, sanitation and hygiene in local schools.

To organize the first-ever relay build that began in May 2016, Habitat for Humanity Cambodia worked with its counterpart in the Netherlands.

Karen, a staff member of Habitat Netherlands, made a comment that aptly described the partnership between the two Habitat entities as well as the relationship between the volunteers and the families. “When you give something to someone else you will be happy.”

Voicing his thoughts after working with the Habitat families, volunteer Mahno said: “Give them a good home and the rest will follow.”

Habitat homeowner Li Hin, 71, could identify with Mahno’s comment. His old home was shared by eight people including his wife, his son, his daughter-in-law and four grandchildren. During the build, Hin, a skilled construction worker, bonded with the volunteers through working and eating together. Despite the lack of a common language, they shared stories and told jokes using body language.

Hin is committed to keeping his new house in a perfect condition. He hoped that “Habitat can support other villages, just like mine.”

The families’ enthusiasm, in turn, touched the heart of Alexandra, a material architecture advisor with the Stiho group. She wanted to give “100 percent and not give up until the task was completed.”

Her colleague Bart Dekker, a director with the Stiho group and a veteran Habitat volunteer, commended Habitat Cambodia for a well-organized event. Volunteering on a build was a great way to foster teamwork among colleagues who did not usually work together, he said.

The partnership brought mutual benefits. Addressing Stiho volunteers, Bart said the personal, life-changing experience was “good for you, good for the people and good for the team.” To the Habitat homeowners, the new homes meant “a new start, prosperous life and better health.”

Summing up his experience, volunteer Bertjan felt that the week was the start of something big. He saw “a chain reaction…if everyone took part, would make a better world.”

By the time the major relay build ended on June 17, Stiho had sent a total of 1,200 volunteers to Habitat sites across the world.

A Journey of Hope in Cambodia